Gina Bisignano — the latest “Karen” to let hate speech fly — received major business backlash for her bigotry on Yelp … where people loaded her page with negative reviews until postings got temporarily shut down.

Bisignano owns a beauty biz in Beverly Hills called Gina’s Eyelashes and Skincare, so after seeing video of her spewing homophobic comments at an L.A. protest of COVID lockdowns … it seems several outraged Internet users took it out on her shop’s Yelp page.

It got flooded with bad reviews, and got so bad so quickly Yelp decided to temporarily suspend the option to leave a review. 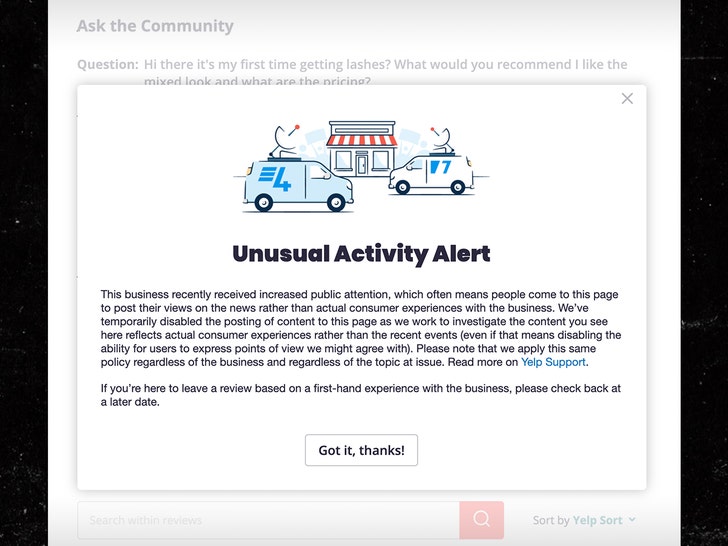 If a person tries, they get this message instead — “This business recently received increased public attention in the news, which often means people come to this page to post their views on the news rather than a first-hand consumer experience.”

— “If you want tarantula lashes and a corpse complexion, please call this bigot for your next KKK gathering.”

— “This place is great. They help create the illusion of beauty on the outside, so I can hide all my hateful, Q conspiracies, and homophobia on the inside.”

Yelp says it’s working to investigate whether this batch of new reviews “reflects actual consumer experiences rather than the recent events.”

As we reported … so far Gina’s only response to the fallout from her public, anti-gay display is announcing on Facebook, “I was attacked online.”

In Honor of Jim Carrey’s Birthday, Find Out 25 Secrets About Dumb and Dumber – E! Online