A month after it began counting down to the release of Serious Sam 4, Croteam has released a story trailer that explains why you’ll be blowing away hundreds of aliens. Humanity is beaten and our civilization is no more. If you believe the wrinkly alien spouting anti-human propaganda that is. Sam and co. aren’t buying it.

In Serious Sam 4, you’ll reprise your role as Sam “Serious” Stone, leader of the Earth Defense Force, and the last resistance of humanity. You’ll be joined by your squad of misfit commandos as you slaughter aliens and fight for the survival of the human race. You’re also looking for the Ark of the Covenant, which, it turns out, is an alien artifact.

According to publisher Devolver Digital, the latest installment in the Serious Sam series will scale up the chaos to unprecedented levels. There are endless hordes of aliens to fight. Fortunately, you’ve got a near-endless, unstoppable arsenal of weaponry at your disposal.


You’ll be running in circles and backpedaling like your life depends on it. Which it most certainly does. All the while, you’ll be unleashing weapons of mass alien destruction. It’s an impossible situation, but somebody’s got to do it. As you can see from the Serious Sam 4 story trailer, you’ll battle monstrosities of all shapes and sizes, including the classic Beheaded Kamikazes. 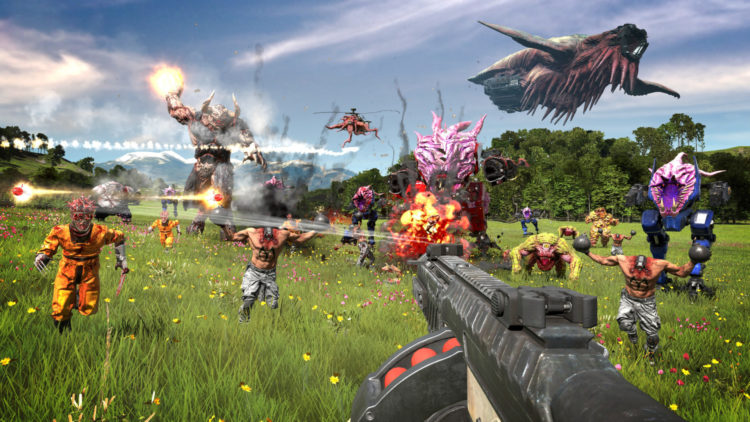 There’s plenty of slaughtering to go around

You can play the action-packed Serious Sam 4 campaign in online co-op mode with up to four players. You can also modify the difficulty level of the primary missions and side quests for an even tougher challenge.


Serious Sam 4 is releasing on Steam and Stadia on September 24. If you preorder the game, you will be rewarded with a Classic Tommy Gun weapon skin. There’s also a Digital Deluxe Edition that includes a digital artobook and digital soundtrack. You can also check out the system requirements for Serious Sam 4 here.

My Time at Sandrock is My Time at Portia dev’s next game, and it’s on Kickstarter

Developer Pathea Games has revealed its follow-up to last year’s My Time at Portia. What was to be DLC for the breezy, little indie...
Read more
Gaming

With the Xbox Series X and Xbox Series S set to launch in the next few weeks, Xbox boss Phil Spencer has been on...
Read more
Gaming

The latest Temtem update is a big one, and it includes a ton of community requested features. According to Crema, the big focus of...
Read more
Gaming

The Inspirations, Relationships, And Story Of Marvel’s Spider-Man: Miles Morales

Whether it's Peter Parker, Gwen Stacy, or Miles Morales, what it means to be a family has always been a huge influence on the web-slingers...
Read more

Clemson Tigers quarterback Trevor Lawrence is leaving the door open about his football future despite previously saying he planned on heading to the NFL...
Read more

A Week Before the Election, Time Is Running Out to Vote by Mail

WASHINGTON — With just a week to go before the election on Nov. 3, the window is rapidly closing for many people who still...
Read more

As this ulcer-inducing election enters the homestretch, early turnout numbers are breaking records. Tens of millions of Americans have already mailed in or dropped...
Read more
Load more