We’re getting pretty close to the release of Beyond Light for Destiny 2, and Bungie has a story trailer for us today. Guardians no doubt have questions about what to expect on Europa. So far we’ve seen the frigid tundra, underground cities from the Golden Age, and Vex machinations deeper yet. The new Stasis power looks to shake up the gameplay for Guardians, but also the Fallen, too.

Today’s trailer introduced us to Eramis, the new big, bad Fallen Kell on the block. She’s the leader and founder of the new Fallen House of Darkness, appropriately named for its new-found power. You see, the Fallen always struggled against Guardians due to sheer power of weaponized Light. In the past, they tried to use SIVA among other methods to gain strength. However, time and time again, they were broken and scattered. Destiny 1 players should remember the mighty House of Devils, as it was a main antagonist of the original story. To say that the Devils were beaten down is an understatement. That’s where Eramis hails from, and she carries a lot of resentment for that humiliation.

Wipe them out. All of them.

In Beyond Light, Eramis is out with a vengeance to obtain power and show humanity and the Traveler the struggles of the Fallen. Her path takes her to Europa where she discovers the darkness-infused power of Stasis. It’s an ice-like power that’s considered highly dangerous, but that doesn’t hold her back. The trailer shows Eramis and her loyal lieutenants employ the powers of the Pyramids to endow the Darkness within the Fallen. This is of course why they are now called the House of Darkness. It’s also the first time that players will take on enemies with similar abilities. We’ve dealt with the likes of the Hive in the past, but their sorcery was their own. It will be cool to see just what the Fallen are capable of now.

It’s also nice to see Bungie’s narrative finally moving along with more characters that have detailed histories. In the Destiny 2 Beyond Light story trailer, we see another look at the Stranger, who has been all but absent since 2014. We also see the friendly Fallen Varicks interact with his former “colleagues” to little success. One thing is certain about Beyond Light — the assault on humanity will continue, and it’s up to you to respond before things snowball out of control.

Stay frosty and you will see more

There are a few other things that might catch your eye in this trailer. Besides the obvious setup for the story, we caught a look at the new House of Darkness lieutenants. These cool villains feature some appropriately cold-weather themed gear. One might even notice vague similarities to the Elite armor from Bungie’s prior work on the Halo franchise. We also caught a glimpse of a tough looking Vex boss that sports frontal shielding for its minions to hide behind. Last but not least, you will want to take note of the fact that Eramis and the Stasis power will be able to freeze you and other Guardians. That could introduce some challenging situations in the midst of firefights, especially if she can shatter frozen foes. 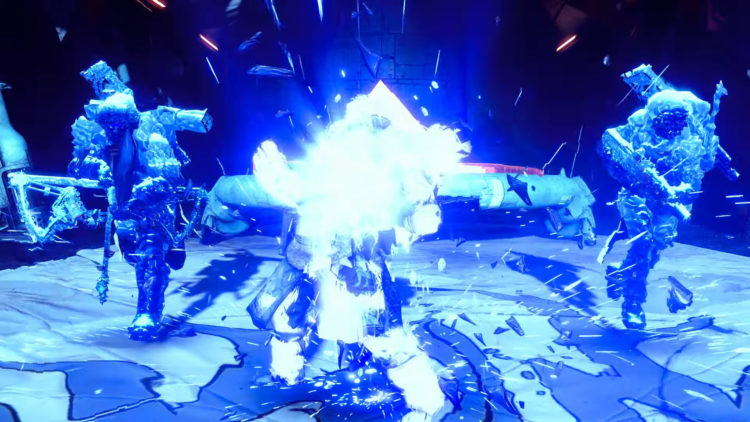 Them bois be lookin’ icy.

Werewolf: The Apocalypse – Earthblood Welcome to the Pack Dev Diary

Path of Exile: Echoes of the Atlas Expansion Released